The vocal and instrumental
Victoria Ensemble
led by Viktorie Dugranpere
is focused on music of the Renaissance,
Baroque and Classicism Era. 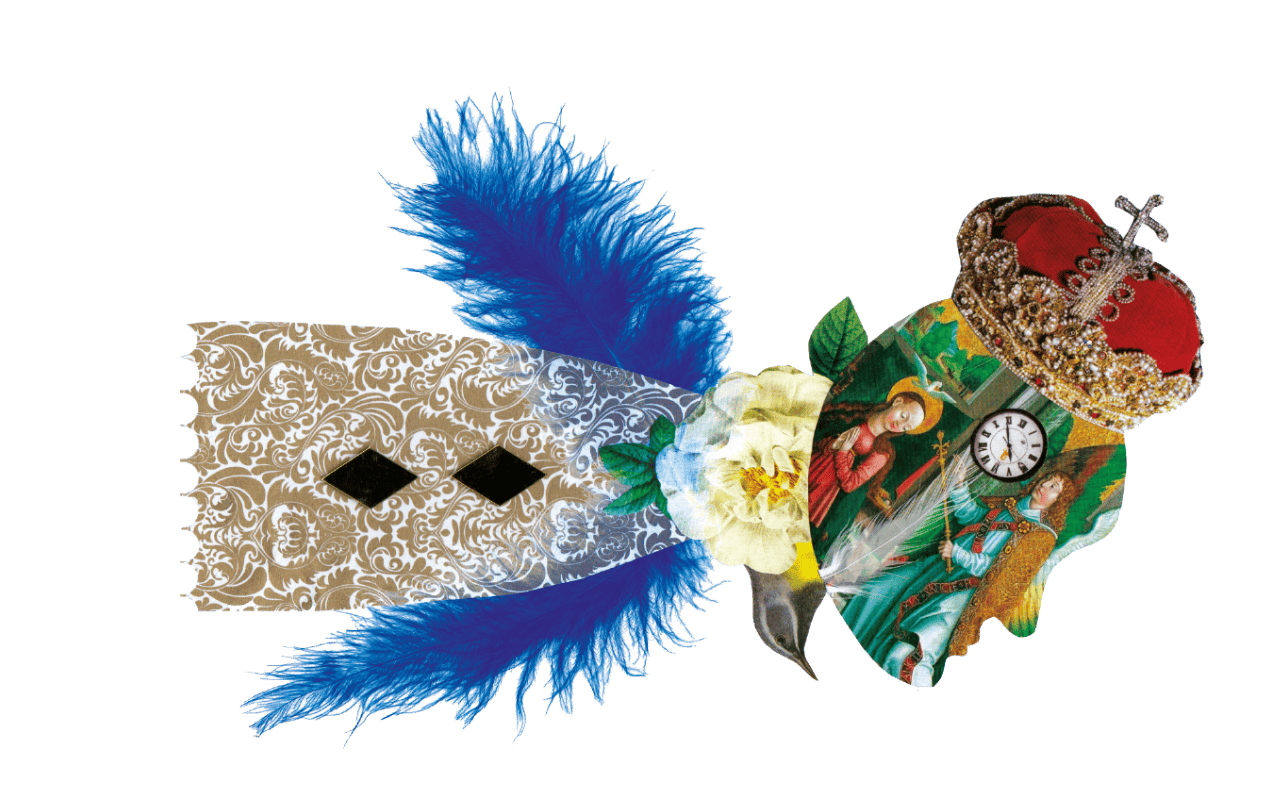 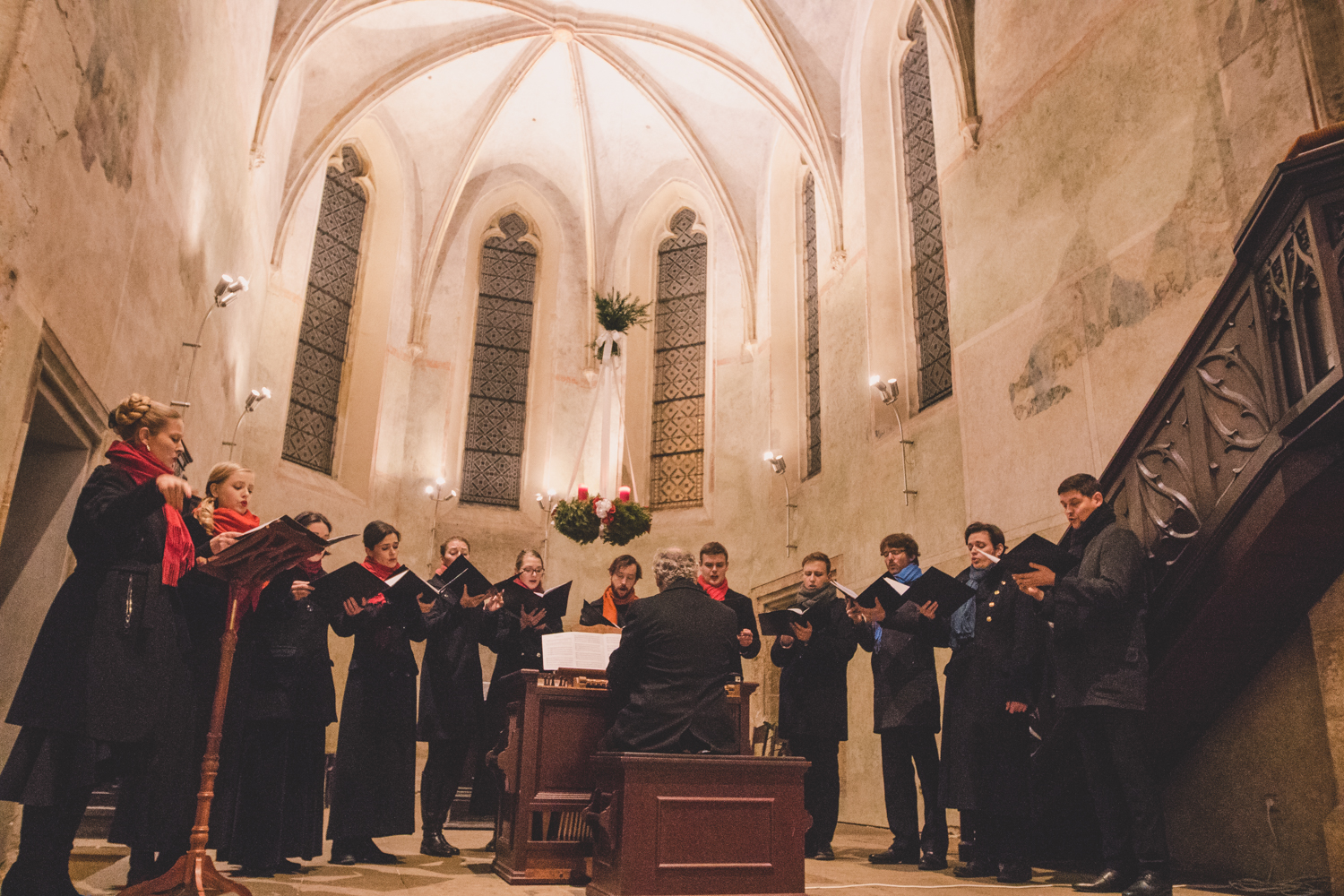 In this programme, we introduce sacred pieces by the most important composers of vocal polyphony across Europe. The concert is based on hymns, antiphons and biblical texts set to music in the 16th century, which liturgically fall into the Advent period. 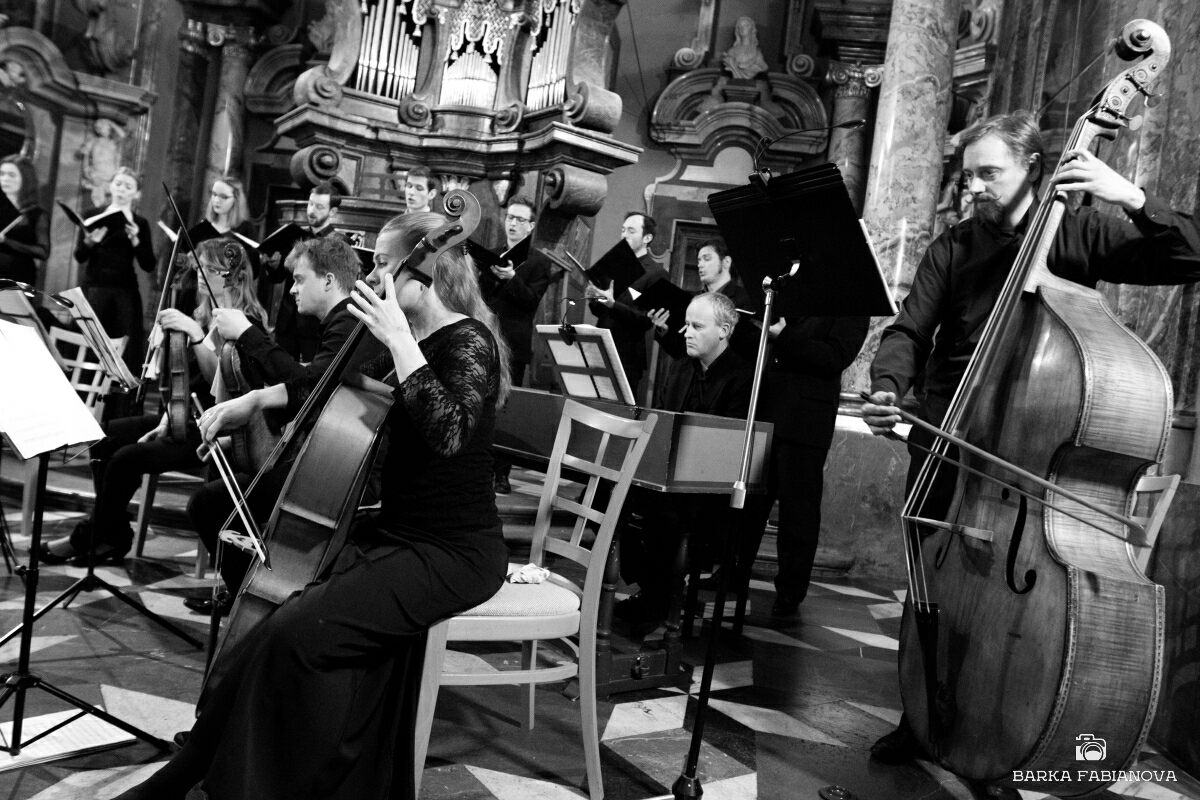 “Rorates” present a specific form of a morning Advent mass in honour of Virgin Mary, typical within the Czech environment. It’s the reason why the text of its entry antiphon “Rorate coeli desuper” was popular among the Czech composers, especially in the 18th century. In this programme we mainly present the works of less known and rediscovered Czech Baroque composers. 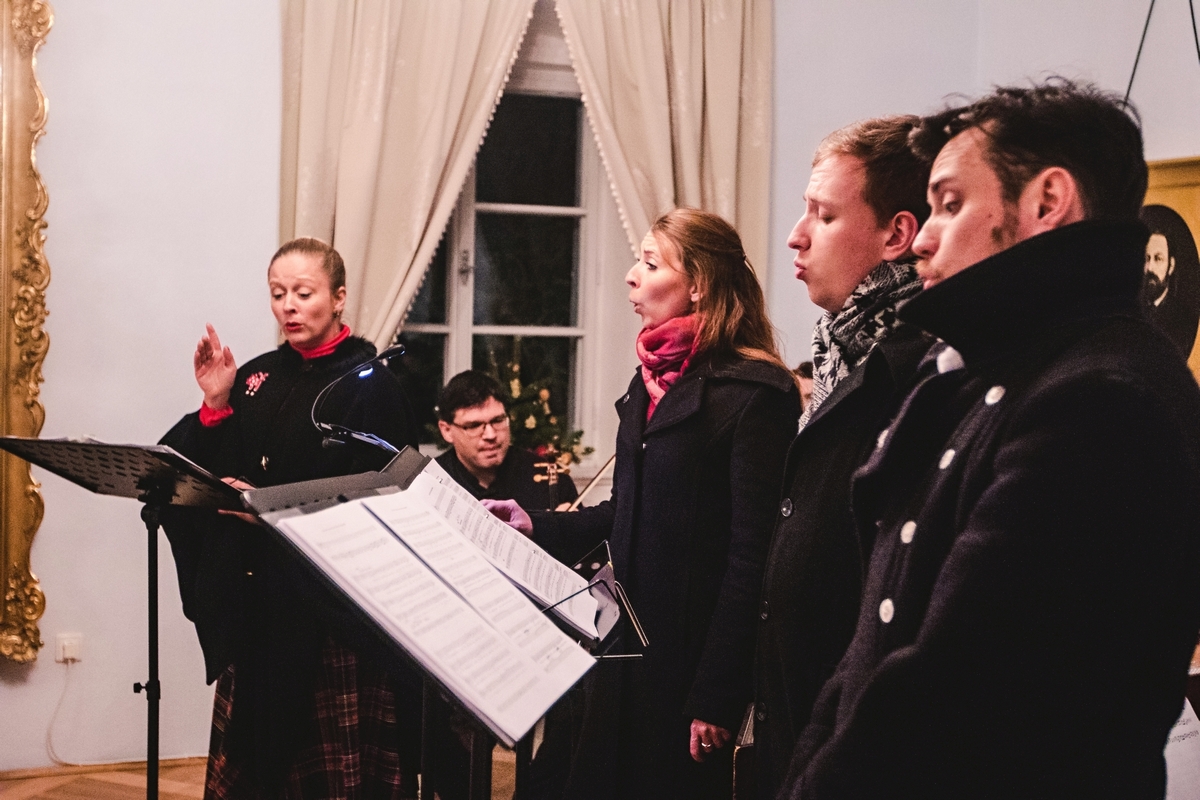 Christmas pastorals of Czech countryside composers from the 18th century, peaking the name of Jakub Jan Ryba, became a symbol of Czech Christmas. We accompany them with charming songs from Czech Baroque hymn books and selected parts from Czech and Moravian pastoral masses. 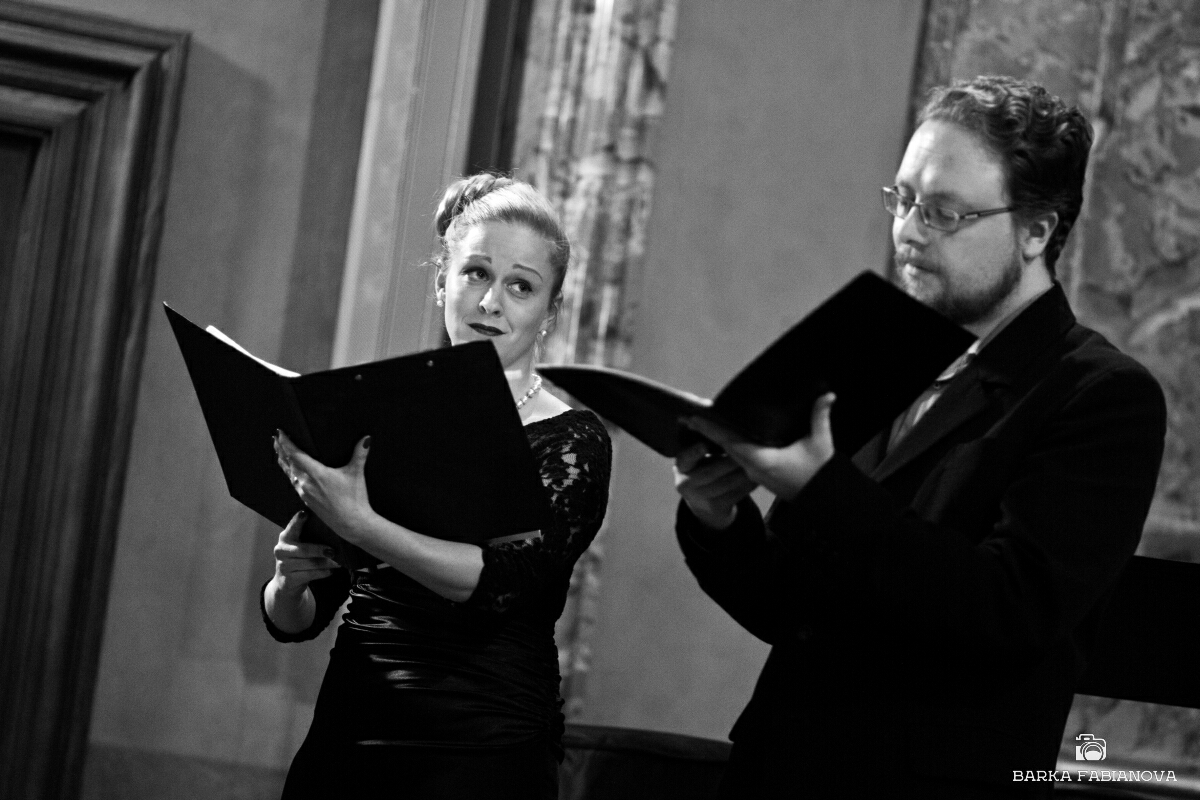 The Prophets have spoken

The programme is named after Jiří Rychnovský’s four-voice song (1540-1615) and presents old Czech Reformation music. It was formed mainly in the Hussite and Czech Brethren hymnbooks, which record a gradual transition from medieval motets to vocal polyphony. We are selecting some songs from them with Advent and Christmas atmosphere. Before Easter, the quires of Prague’s churches resounded with a large number of works by both domestic and foreign composers connected to Prague. We chose mainly two magnificent Stabat Mater (F. I. A. Tůma, A. Caldara), but also smaller, remarkable and almost unknown works by Czech Baroque authors. 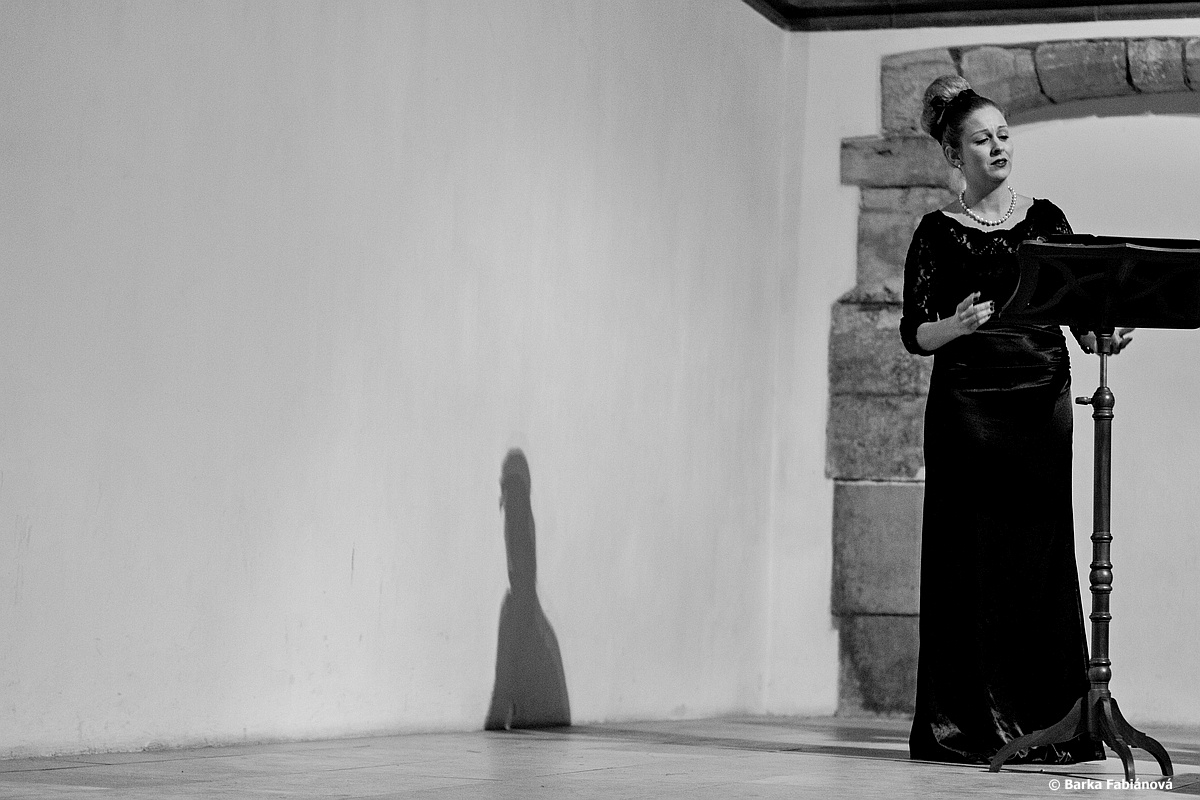 “The Dark Watch” was written in three parts by Couperin as liturgical music for Easter Wednesday. This liturgy began at night within the light of fifteen candles which were gradually extinguished. The texts are the Old Testament lamentations of the prophet Jeremiah over the captured and ravaged Jerusalem, being at the same time lamentations for the crucified Jesus in a transferred meaning. This sacred composition captures the last years of the reign of Louis XIV. in whose court the composer dwelled for his entire life. If an occasion arises it is possible to add instrumental compositions or a spoken word of a clergyman.

We focus on the sacred works of early and high Baroque, which were composed to honour Czech patrons. In addition to the magnificent St. Wenceslas Mass Missa Sancti Wenceslai by Adam Michna we join Missa sancti Adalberti, whose author is the Piarist priest Vojtěch (Adalbert) Pelikán, or Litany to the Czech patrons by Antonín Celestin Mentzel. 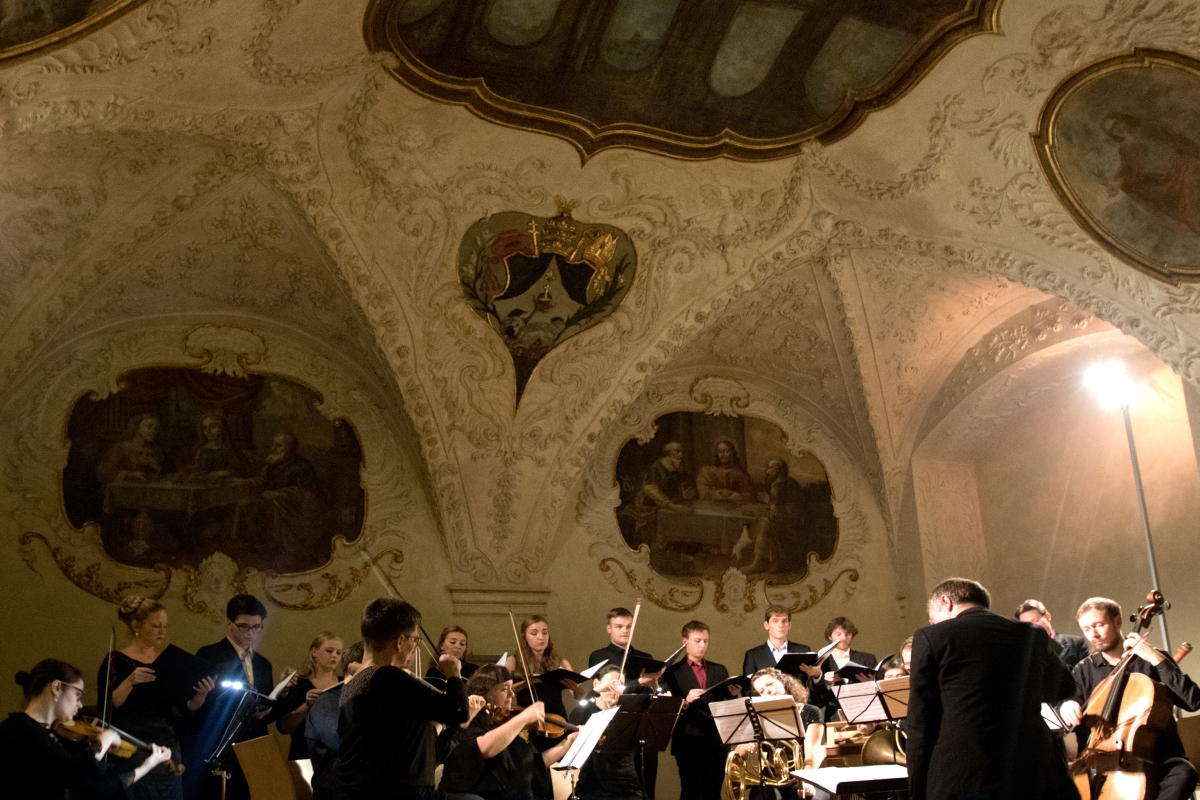 Reichenauer is undoubtedly one of the most prominent personalities of Czech Baroque music, but it has only attracted more attention in recent decades. He worked in Prague’s Malá Strana with Count Václav Morzin as a domestic composer. He wrote instrumental music for the needs of the Morzin noble band (orchestral overtures, instrumental concerts, chamber compositions); His instrumental concerts has their modern premieres in recent years. In cooperation with the Baroque Orchestra of Musica Florea under the leadership of Marek Štryncl we are now bringing a world premiere of some of Reichenauer’s sacred compositions – his offertories, Litany to the holy name of Jesus or Requiem. Music of the Bohemian Baroque Monasteries

We begin this programme with the motet ‘Laudetur Jesus Christus’ by Bohuslav Matěj Černohorský, which is a Christian greeting put to music, and we present more of Czech sacred music of the first half of the 18th century across the lands of Bohemia. Though but a handful of our music has survived from this period, some of these authors are true masters in comparison with the high European standard. The programme comprises of pieces found in collection of Broumov, Strahov, Rajhrad monasteries and a Piarist college in Slaný. In the last third of the 16th century Prague became one of the main cultural centres of Europe. Rudolf II, who was eager to support science and culture, was surrounded by outstanding thinkers, scientists, artists, but also composers from all over Europe. Together with the instrumental ensemble Concerto Aventino, led by renowned flutist and conductor Jakub Kydlíček, we present secular and sacred music by composers connected to Mannerist Prague. The personality of Claudio Monteverdi, a composer standing on the edge of traditional Renaissance style and new musical era, doesn ot have to be introduced much. He is best known to be a completeer of madrigal form and as one of the founders of the opera, who contributed significantly to the birth of the Baroque style. In the first half of the programme we present selected compositions from the collections of Selva morale e spirituale and Messa a quatro voci e Salmi. In the second half, works from the fourth and the eighth book of madrigals and from the Scherzi musicali collection. 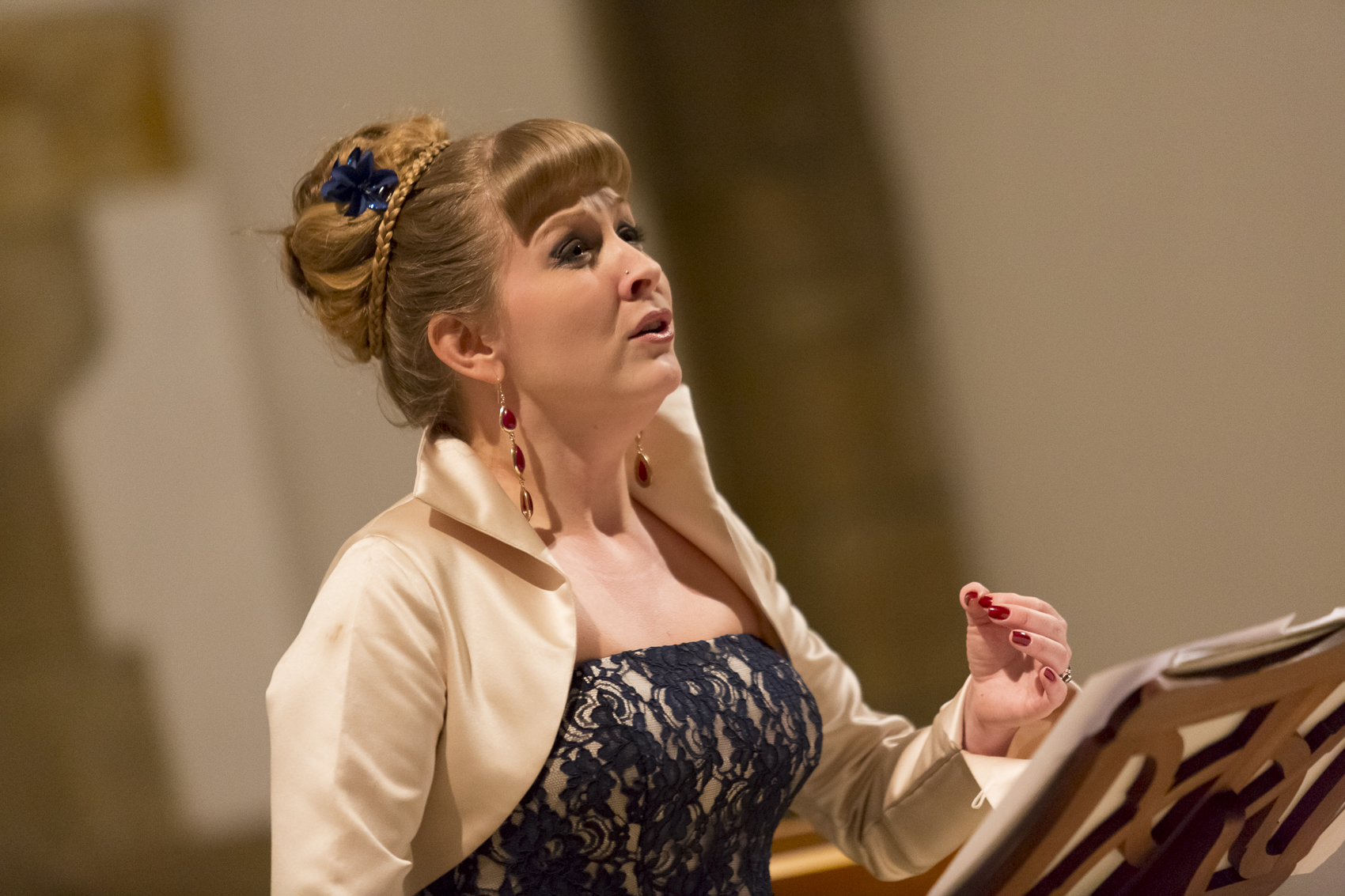 One day of the king of France

How could the day of Louis XIV or his succesor look like? In this programme we present sacred music, chamber compositions, cantatas and opera arias by two generations of French Baroque composers, closely connected with the royal court. 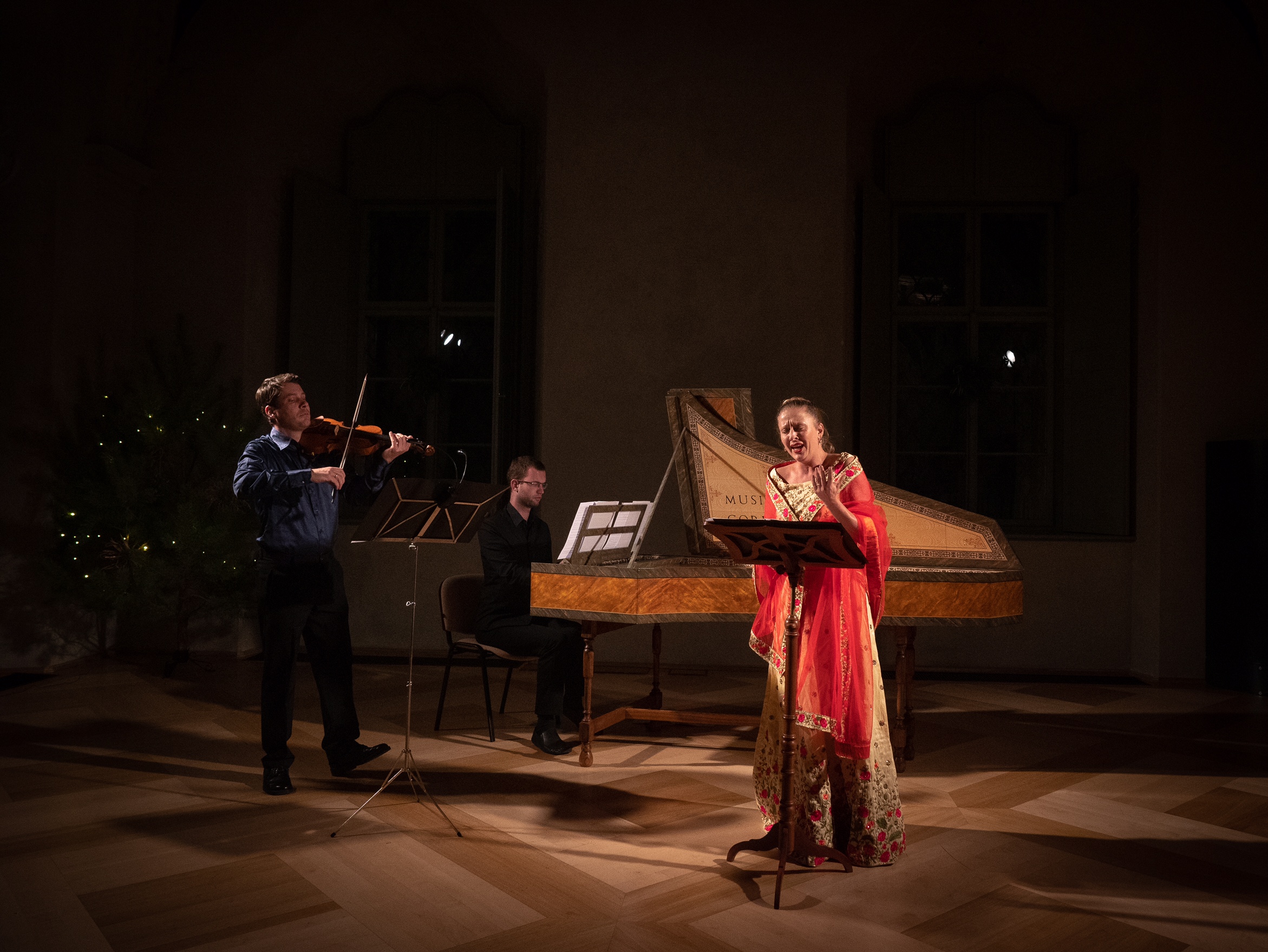 Georg Friedrich Händel, one of the Masters of Baroque music, is the author of an extremely large number of works, including about 25 oratorios. In this programme we present virtuoso soprano arias from oratorios mostly with Old Testament motives (can also be interpreted as themes from the Hebrew Bible). These dramatic biblical stories are told by an unconventional chamber cast. 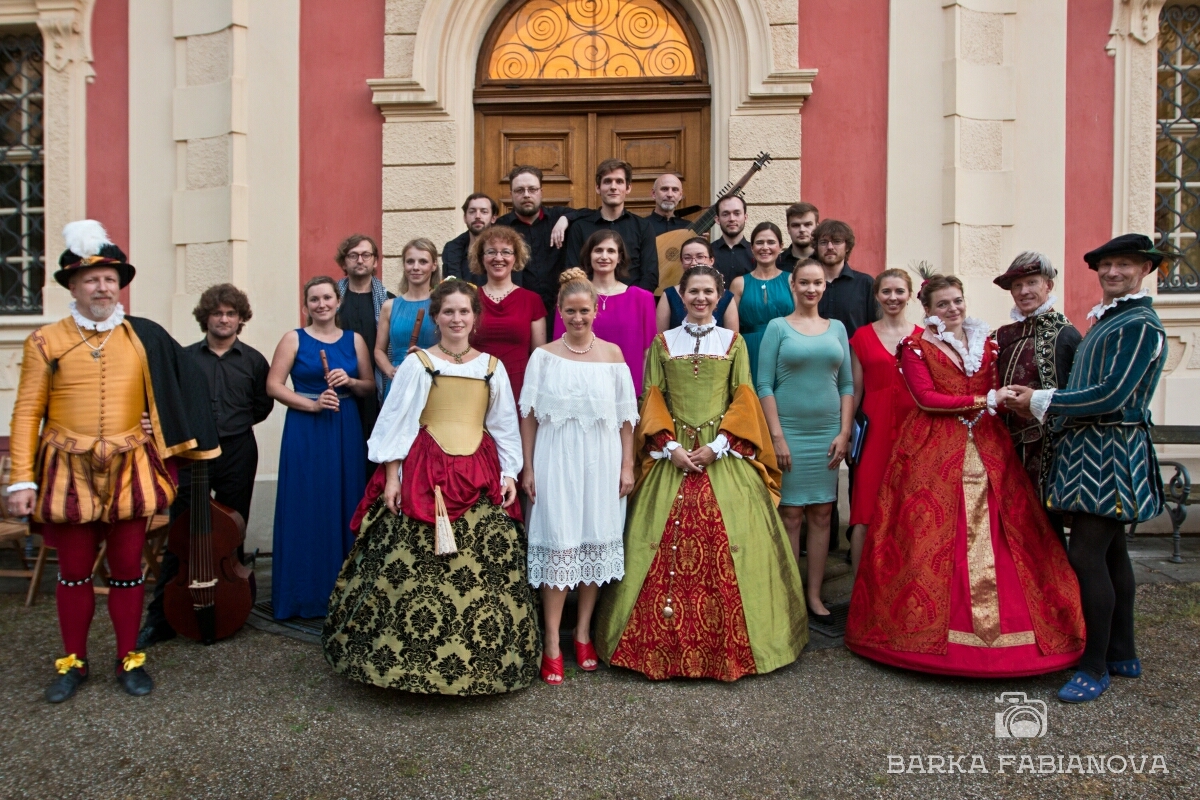 Music and Dance of the renaissance Prague

In this programme we remain devoted to Prague during the reign of Rudolf II. At this time we present exclusively the secular music – madrigals, songs and popular dances of Mannerist Prague. 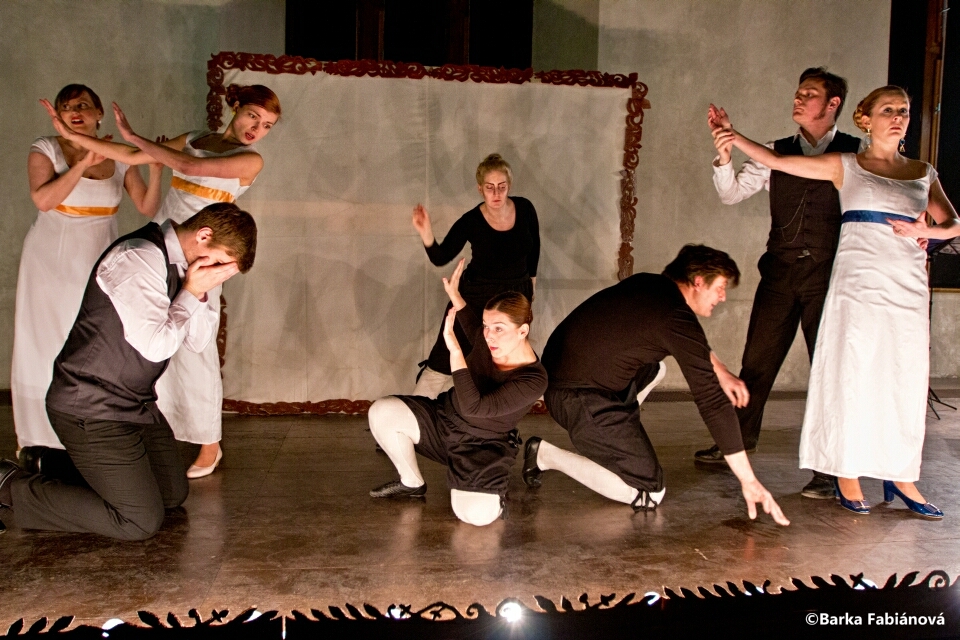 The work of the Modena composer Orazio Vecchi is a remarkable manifestation of the traditional Italian music theatre of the late Renaissance. It is subtitled “comedia harmonica”, for which we now use the term “madrigal comedy”. The main protagonists of this genre were the characters from the traditional commedia dell’ arte. L’Amfiparnaso with its own scenery, costumes and authorial masks (Emilia Karlović) is presented in cooperation with the theatre company Teatro Comico. We offer the initial madrigal verses in original Italian or Czech and English translations. The Muse of Versailles

Here we cooperate with En Garde!, whose main focus is French Baroque dance which is sensitively connected with the vocal and instrumental component in a compact authorial performance which according to the contemporary model, pays homage to Louis XIV, the “Sun King”. 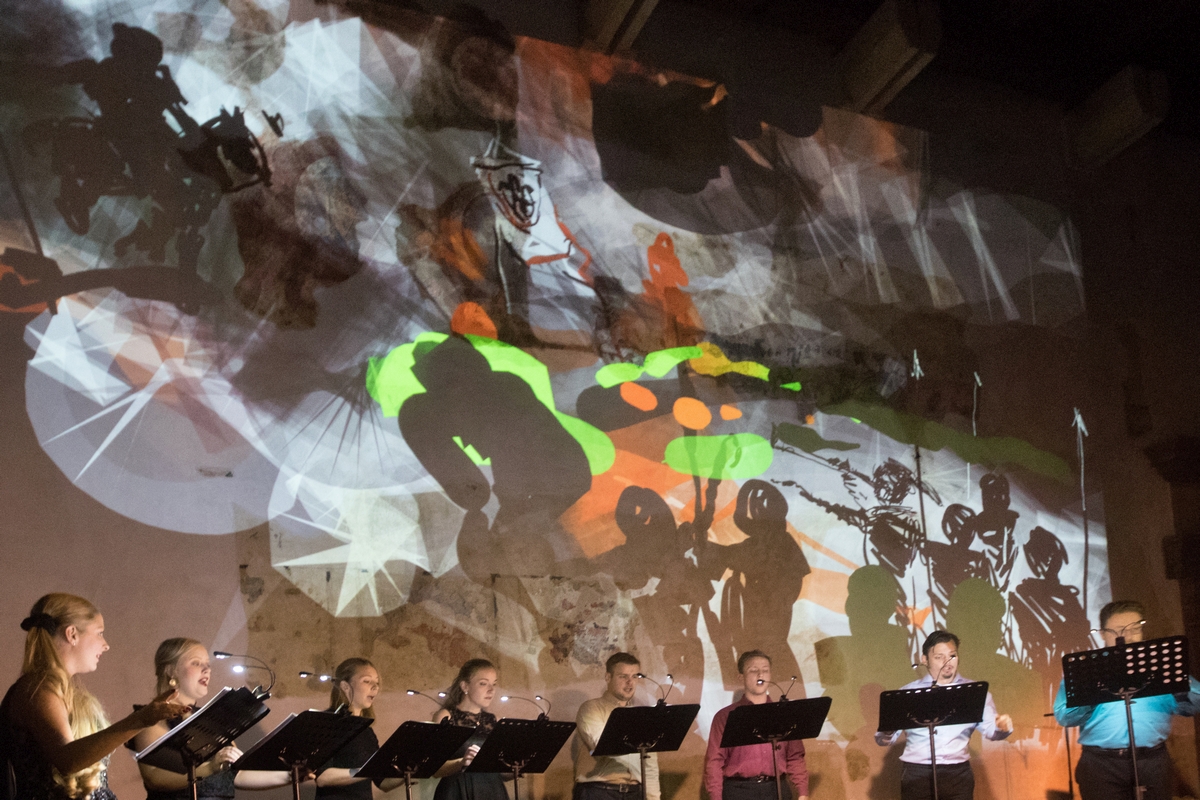 The Rush of Paris, The Song of London

We are connecting the concert of renaissance music with live digital painting. Eight singers a capella are performing Clément Janequin’s French program chansons where themes like: War, Bird´s song, rush of Paris etc., are compiled using existing and made-up words, sounds and interjections. Those stories of Janequin´s compositions are ‘told’ by Scottish painter Frances Sander right upon the wall behind the singers. This project is accompanied by a drummer Jan Šikl on the improvised set of percussion. Opposite to this specific French composer we are putting the famous author of the English renaissance John Dowland, with his melodic and melancholic songs. In 1750s the impresario of Prague Kotzen Theatre was G.B. Locatelli. Thanks to his taste and abilities the thrilled Prague audience had an opportunity to hear the greatest opera hits of all Europe performed by the top Italian singers. A variety of arias and duets from serious and comic operas are here presented in contemporary world premieres. This programme presents the rich world of Italian opera, specifically the genre of the opera buffa (or dramma giocoso). Selected arias of various characters come from operas that were mostly performed on the stage of Thun or Nostic theatre in the 1780s and 1790s. We present most of them in contemporary world premieres. Chamber music of the whole baroque Europe – cantatas, songs, airs and duets of the prominent Italian, German, English, Spanish and French composers celebrating love and nature above all. 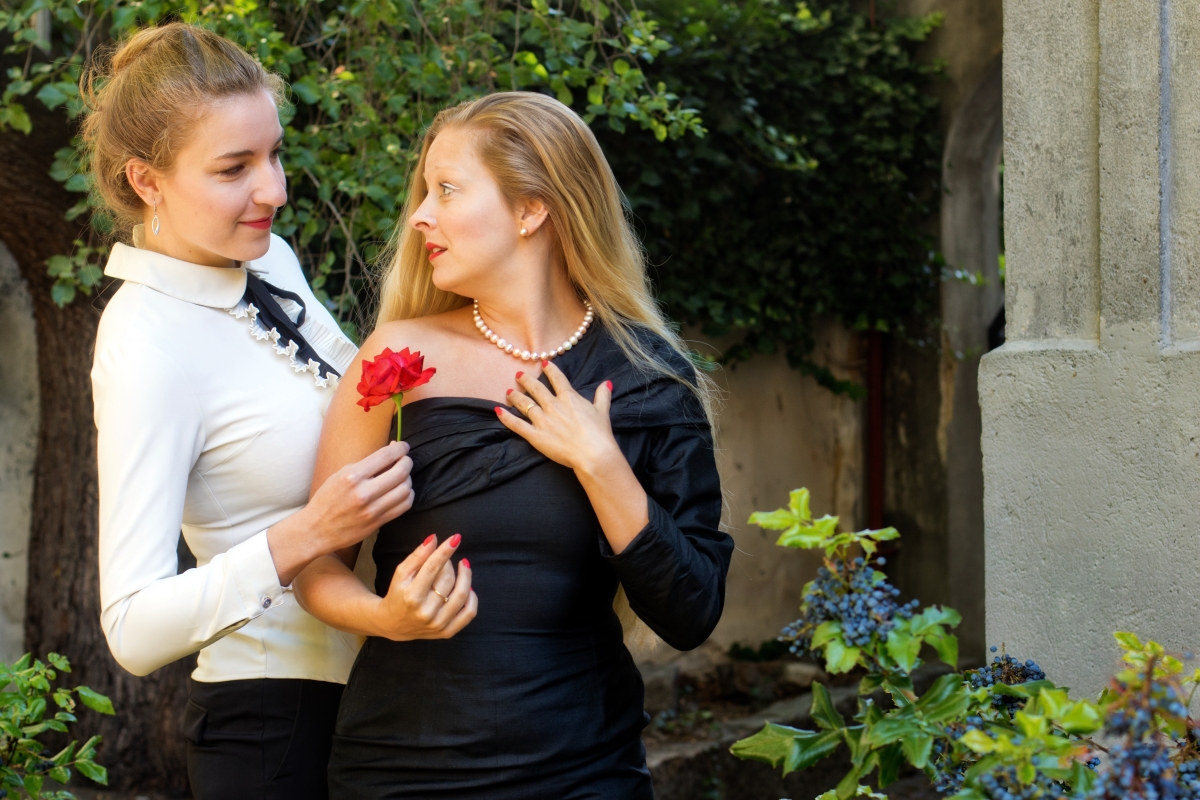 Here we present a selection of Italian operas by most important Baroque composers accompanied by a harpsichord. These are lyrical and coloratura arias for soprano, alto arias (which at their time belonged mainly to castrates) and also love duets. The secular cantata crystallized early in the first half of the 17th century and its birth and evolution related closely to the birth and formation of the opera. It flourished mainly in salons of the nobility and courts of the high clergy. The main centre inclined to this exclusively soloist art (usually only accompanied by the basso continuo) was Italy. The pillars of our programme are three extensive cantatas of the various eras of the baroque period, two of which represent the tragic stories of strong women – Mary Stuart (G. Carissimi) and Lucrezia of Rome (A. Scarlatti). It is highly recommended to project subtitles during this show. Baroque Italy in arias and songs

This programme presents shorter compositions for soprano and basso continuo. It focuses on early and culminating baroque of the main Italian cultural centres of its age. You can enjoy adorable love songs of the Venice feminine composer Barbara Strozzi and some other compositions of her predecessors and successors.